When it comes to bone health, Vitamin D and calcium get all the credit, though they actually have a team of nutrients supporting them and their efforts to build us scaffolding with high bone mineral density and strength. One of those supporting teammates is magnesium.

Magnesium is an essential mineral with roles throughout your body, though 60% of it is found in your bones.

This mineral helps regulate the delicate balance of bone-building nutrients like calcium and phosphorus.

Too much and too little magnesium may negatively impact bone health.

Hitting your RDA may help you avoid osteopenia and osteoporosis.

There’s a limit to how much magnesium we should get through supplements, so a combination of food sources and supplements is the best option for most people.

Magnesium is the fourth most abundant mineral in the body, though 60% of it is found in our bones. But unlike the tidy roles football players are divided into, magnesium goes to work throughout your body. This essential mineral is required for over 600 chemical reactions in the body, and they’re not so minor, either (Baaij, 2015). Keeping our heartbeat steady, regulating our blood pressure (and potentially lowering the risk of heart disease along with it), and building and maintaining bone health are just some aspects of the complex role of magnesium in our bodies. Magnesium is also required for proper muscle and nerve function, energy production, DNA replication, and RNA synthesis. Its effects ripple out across both our mental and physical health.

So if magnesium is so important for bone health, why don’t you hear about it? It may be because, until recently, magnesium has been mostly overlooked for, well, everything. But magnesium is essentially the gatekeeper for a lot of what needs to happen to keep your bone health strong.

Magnesium affects bone health because of how it interacts with a number of other nutrients, specifically: calcium, phosphorus, and vitamin D. It also plays an important role in the function of parathyroid hormone (PTH), which is responsible for regulating calcium and phosphorus levels in the body. This mineral plays such an important role in these hormonal interactions that hypomagnesemia (low magnesium in the blood) also causes organs to not respond as well to the PTH that is created. It may also cause vitamin D metabolism to break down (which would interfere with calcium absorption). In this way, low magnesium throws off many things you need for healthy bones. In fact, you cannot even treat these symptoms with extra vitamin D and calcium supplements. (We’re not saying you shouldn’t cut back your calcium intake in favor of magnesium unless a healthcare professional says you need it.) The only thing that will return the levels of these nutrients to normal is getting magnesium levels back where they belong (Swaminathan, 2003).

The Women’s Health Initiative Study observed an association between the highest magnesium intakes and wrist fracture risk in postmenopausal women (Nieves, 2013). For these reasons, magnesium deficiency is associated with osteoporosis. Multiple studies have found a connection between serum magnesium levels and bone density; the lower the magnesium levels, the lower the bone mineral density. And low magnesium has also been found to promote inflammation, which may accelerate bone loss (Castiglioni, 2013). That’s serious considering as of 2009, 68% of women (who are more likely than men to develop osteoporosis) in the United States were not hitting the recommended dietary allowance (RDA) of this vital mineral (Rude, 2009).

But getting enough magnesium can bolster bone mass and strength by stimulating the release of the hormone calcitonin, which stabilizes calcium levels by drawing the mineral out of the blood and soft tissues and returning it to the bones. In addition to regulating levels of vital minerals, this may help in the prevention of osteoporosis and osteoporotic fractures.

We already mentioned that magnesium carries out some vital functions in your body, like working in tandem with calcium to keep your heartbeat strong and steady (Iseri, 1984). But that’s not so much a health benefit of magnesium as it is a vital function. Below are some of the benefits you may experience from hitting your daily magnesium needs:

And one of the major advantages with this mineral, in particular, is that it’s generally well-tolerated and considered safe. Though if you take too much, you may experience side effects like abdominal pain, diarrhea, and nausea. It’s also easy to find, though, as a supplement, it’s not regulated by the Food and Drug Administration (FDA). That means you should only buy your magnesium supplements from a brand you trust.

How to get enough magnesium

We can rely on dietary sources, dietary supplements, or a combination of the two to boost our magnesium intake. Luckily, if you’re enjoying a diet low in processed foods, you’re likely already well on your way to meeting your RDA of 400–420 mg of magnesium for adult men and 310–360 mg for adult women. The amount of magnesium considered the upper limit for supplements is 350 mg, which means the rest should come from dietary intake (FoodData Central, 2020). So a meal plan rich in sources of dietary magnesium like green leafy vegetables, cashews, whole grains, and dark chocolate paired with supplements is likely most people’s best bet for meeting their RDA. This combination method ensures you’re getting enough magnesium without risking side effects.

Magnesium supplementation is a solid option and likely a necessary addition to a healthy diet for most people. A study from 2005-2006 found (Rosanoff, 2012) that 48% of Americans are not hitting their recommended intake through food, though true magnesium deficiency or hypomagnesemia affects less than 2% of the population (Guerrera, 2009).

If you're going to take a magnesium supplement, you want one that is manufactured with the utmost care, quality and potency and that is formulated for maximum absorbency. Rite magnesium uses magnesium that is bound to the amino acid glycine which allows for superior absorption. 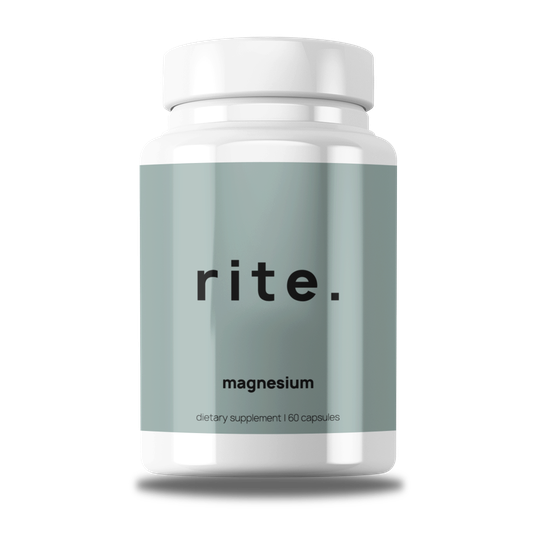 Rite magnesium delivers a pure supplement that you can trust, made with minimal ingredients. In our magnesium capsules, you will find the following ingredients: 400mg Magnesium Glycinate. 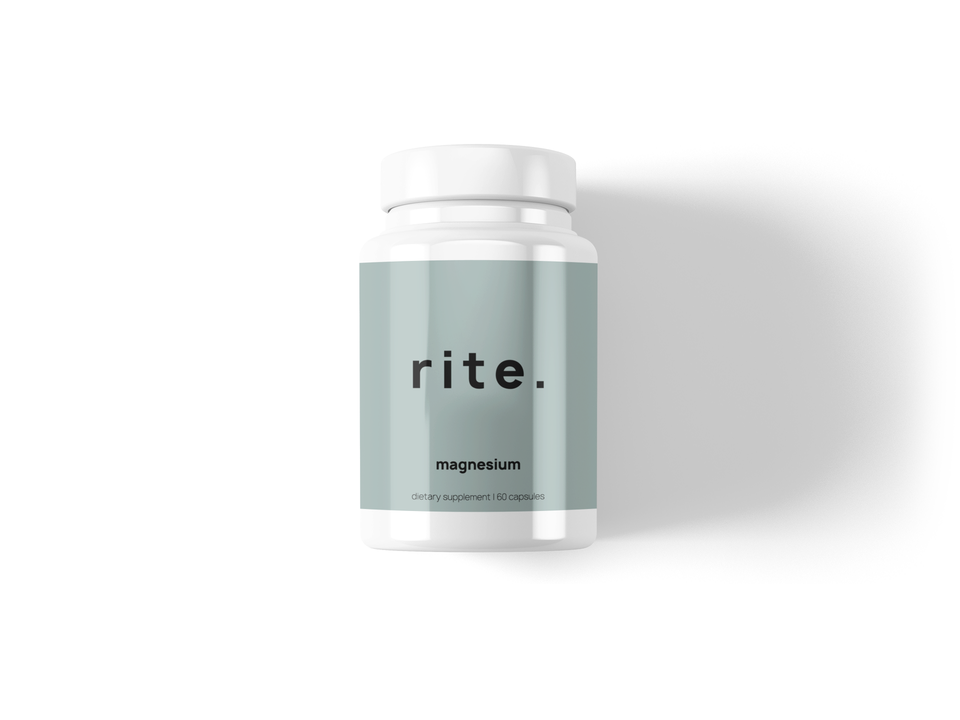 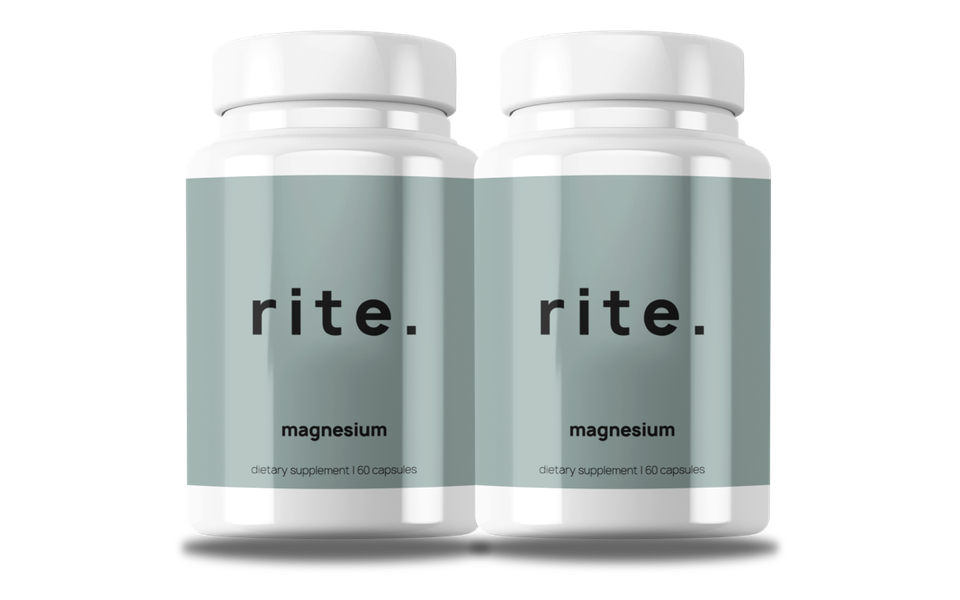 © 2020 rite * This statement has not been evaluated by the FDA. This product is not intended to diagnose, treat, cure, or prevent any disease. Ingredients can change at anytime, please refer to the ingredient list on the bottle for the most updated list.